That is the reason his company, which manages several hotels, has been running a training program for some of its managers and other staff members to improve their hospitality skills, connect with local business leaders and learn more about local tourist offerings.

Technology, some hotels are finding, has its limits.

Similar programs are sprouting in other cities, involving not just hotels but also restaurants and even cities themselves, which see the personal touch as giving them a competitive edge. For business travelers, in particular, talking to someone knowledgeable about a city can lead to a good restaurant. And it can also help expand business leads.

As Mr. Aquino put it, “We have to be ambassadors for the city,” adding that the small size of Grand Rapids means “we’re one degree away from the person that you need to meet.”

Andrew Hampe of Chicago, who previously worked for Amarr, a manufacturer of industrial overhead doors, spoke of one particularly social bartender at the JW Marriott Grand Rapids, who knew local business leaders.

The bartender had told him that members of the Lacks family who own Lacks Enterprises — which made automotive and other industrial products, including garage doors — would be dining at the hotel that evening and made an introduction. “The atmosphere created by the staff translated into an instant rapport between us,” Mr. Hampe said. As a result, he said, he made “a complete career change, where I am now acting as a business consultant for Lacks Enterprise.”

Philadelphia saw similar value in training programs as its convention center expanded in 2011. Julie Coker Graham, the president and chief executive of the Philadelphia Convention and Visitors Bureau, said the city wanted meeting planners to know “we were working very closely with our hospitality community to ensure that customer service was top of mind.”

Called PHL Welcomes U, the online video training program, which consists of hospitality topics and itinerary recommendations, is also open to ordinary Philadelphians. Ms. Coker Graham said this allowed “all Philadelphians to feel empowered and to use these tools to create a more meaningful and positive experience.” She said the program “really created ambassadors throughout our city and in different industry segments.”

The program is run by Temple University’s School of Sport, Tourism and Hospitality Management. In an email, Elizabeth H. Barber, an associate professor and executive director of business development and partnerships, said about 260 people had recently enrolled in the program, which also offers certificates. “People interested are from the hospitality industry, restaurants, recreation centers, parking services, and a variety of other industries,” she wrote.

Philadelphia’s training was developed by Treat ’em Right in St. Louis, founded by Phil Bruno in 2000. Mr. Bruno, who had previously worked for Anheuser-Busch’s amusement parks, said he had found that better training led to higher employee satisfaction and higher visitor ratings. “Improve the experience for guests and exceed their expectations,” he said, “and they’ll be back and they’ll bring others with them.”

Mr. Bruno said that the state of Pennsylvania, which owns of the city’s convention center, called the Pennsylvania Convention Center, had initially hired him in 2010 to develop training to make staff members more hospitable and informed. He trained about 1,000 workers over a two-year period.

Some cities hire Treat ’em Right, Mr. Bruno said, because of what he called “self-esteem issues,” helping workers believe their city is worth visiting.

Generational differences also create a need, Mr. Bruno said. “Millennials just want information,” he said. “They don’t want to go through the trouble of going to people and their filters to get it,” preferring kiosks over clerks, while veteran business travelers still want personal encounters.

“The flip side of this is the millennial working in a guest-facing position” who may not be well versed in personal communication, Mr. Bruno said, “because they have been engaging through other means, through the phone, or through their tablet.”

But what remains important, he said, are “feelings, since we have recognized we are in the experience economy. Service and hospitality are two different things. Service is the things that you do for people. Hospitality is how you make them feel while you’re doing those things.”

Some cities and regions have developed their own programs aimed at increasing the number of conventions and ensuring that visitors have a positive experience. Among them is the Destination Champions program developed by the marketing organization Discover the Palm Beaches to increase convention activity in Palm Beach County, Fla. The program encourages local business leaders to promote the county as a convention destination whenever they are traveling on business.

Other places developed programs for specific time periods, then continued them. Detroit created “The World Is Coming to Detroit” when the city was the host of Super Bowl XL in 2006, then used a version of the program for several years. According to Michael O’Callaghan, the executive vice president and chief operating officer of the Detroit Metro Convention and Visitors Bureau, the program began as a hospitality training program for the bureau’s 800 members but eventually became a seminar series that has recently focused on social media and other topics.

A consulting program based in Tucson, Certified Tourism Ambassadors, trains hospitality workers. Mickey Schaefer, the chief executive and founder, said she had developed the idea in 2006 while working for the American Academy of Family Physicians to plan its conventions. Hospitality workers sometimes did not know their own cities, leading to bad experiences, she said.

Ms. Schaefer said she and a colleague developed the program, which includes workshops that look at hypothetical itineraries.

The program, she said, “is more than just helping the customer. It is helping them find the richness of whatever they are interested in.” She added that the program also instills civic pride. “If you have pride and passion for where you are, that will come out in any interaction.”

Clifford Steward, a bellman at the Hampton Inn and Suites Columbus-Downtown in Ohio, participated in the program. He said he had people skills but wanted to know the city better.

The program “made me more aware of the activities around the city that people can experience,” he said. “When a guest is pleased, and when they return from any event, they greatly appreciate it and it makes us look good and the city look good.”

Chuck Gose, the vice president for business development and partnerships for the business communication app StaffConnect, said Mr. Steward was the reason he stays at Hampton Inn and Suites. “When I think of somebody being a true ambassador of a city, he comes to mind, because whether I go back for business or whether I go back with my family, that’s where I am going to go stay,” Mr. Gose said.

Citing Mr. Steward’s precise restaurant advice, Mr. Gose said: “Having well-trained staff helps a business traveler break out of a rut. I think as business travelers you can become very habitual in your travels and not really take the time to embrace the unique elements of certain cities.”

Correction: July 12, 2017
An article on Tuesday about hotels that are training workers to improve their hospitality skills misstated the name of Philadelphia’s tourist bureau. It is the Philadelphia Convention and Visitors Bureau, not Discover Philadelphia. 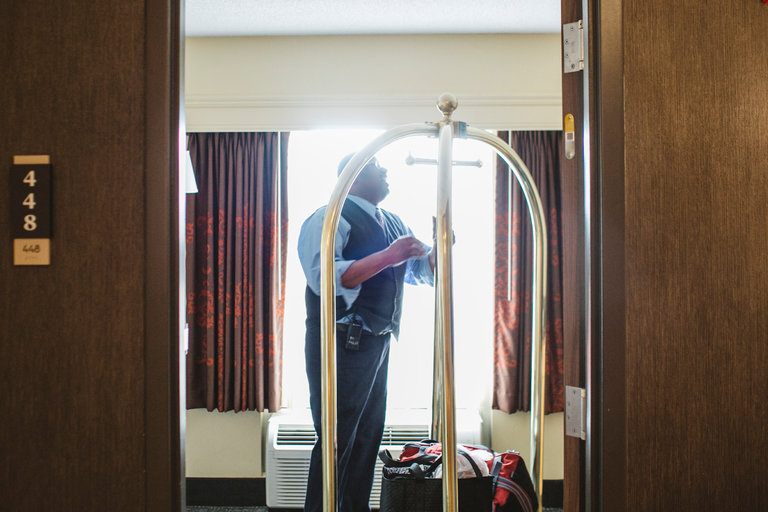 Clifford Steward, a bellman at the Hampton Inn and Suites Columbus-Downtown in Ohio, in April. He participated in a hospitality training program to learn more about the city. 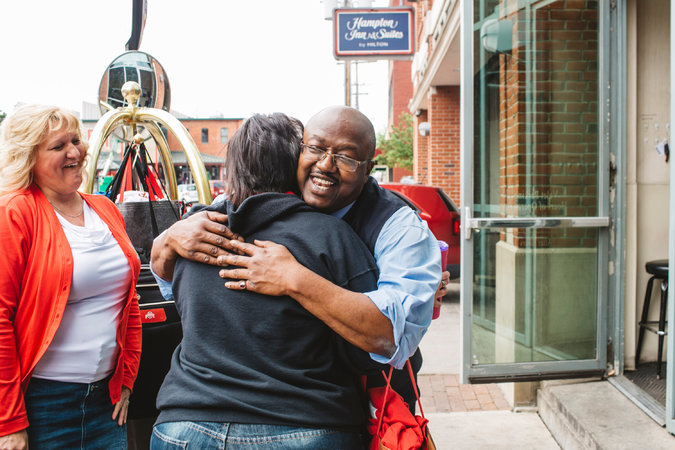 Mr. Steward hugging a guest at the hotel. “When a guest is pleased,” he said, “they greatly appreciate it, and it makes us look good and the city look good.” 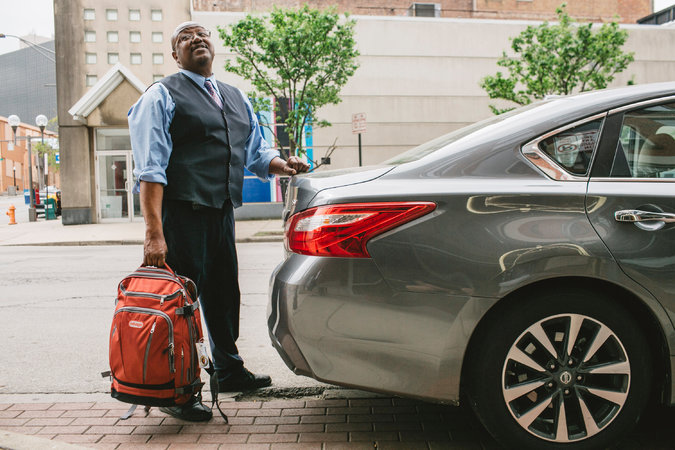 Mr. Steward helping a guest. He said he participated in the training program because he had people skills but wanted to know the city better.” 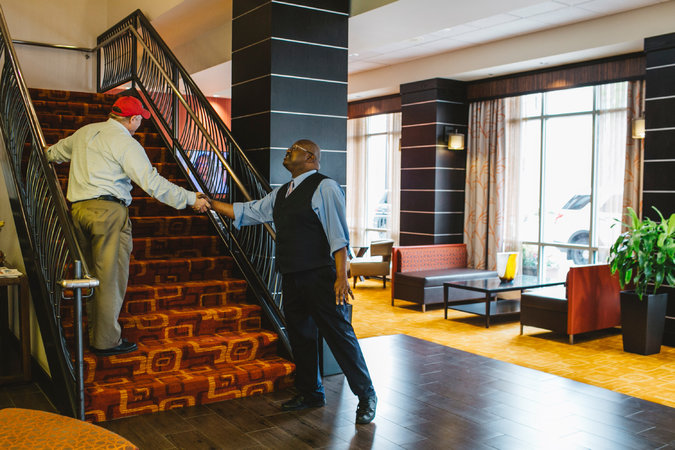 The program “made me more aware of the activities around the city that people can experience,” Mr. Steward said.”